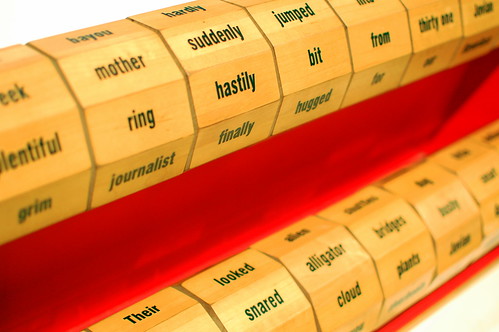 The most important part of writing is rewriting.

–Every published author, writing teacher, and book on writing in the history of the field. (paraphrased)

It’s hard to make yourself sit down and write. Once you break through that barrier, you come face to face with the much worse truth that you’ve just done the easy part.

The fact is that even you can write pretty good first drafts, your writing is a weak copy of what it is supposed to be until it’s been thoroughly edited and rewritten.

But damn is rewriting hard. One of the hardest parts about it happens at the level of the individual sentence. When you go back and read your own writing, it’s easy to get trapped into thinking that your sentences are “just fine.” The might not be great, but it feels difficult to come up with a way to change them. They do the job. They’re not beautiful, but they’re structural. They hold the whole thing up, and you are worried that if you fiddle too much everything will come crashing down.

This exercise is here to help. This is a deliberate practice exercise, which means that it is intensive, tedious, and a lot of work. But if you do it enough times, it could transform how you look at your own sentences.

Take a sentence you have written. Now rewrite the sentence 50 times.

That’s it. Sounds simple, right? But not easy. Like I said, it’s tedious. Like practicing tiny variations on your golf swing over and over and over until you get it right.

To really get the benefits from this exercise, you have to do it a lot. Just like any other exercise. Say, three times a week for a month, just for starters. Just like starting a new workout routine, you won’t even know if you are getting benefits for a few weeks. But once they come they’ll be enormous.

I’ll post a link first try at this exercise at the end.

Here are a few rules about the exercise. They’re designed to give you some focus so you get the most out of the exercise. Don’t worry so much about whether you’re following the rules that you spend 20 minutes memorizing them and never get to the actual work! That’s a method of stalling. The rules are designed to be intuitive, so just read them through and get going.

Rule 1: To start, pick a sentence that’s long enough that you can play with it. The shorter the sentence the more challenging the exercise. It would be very difficult to write “See Dick Run” in 50 different ways. That’s like starting with a 200 lbs bench press. Work up to it!
Here’s my sample sentence:

Every summer John and Lilly spent their days up by the lake, where they picked crabapples from the tree and skipped them across the water.

Rule 2: Copy and paste your sample sentence 50 times in a document, and then work from there. That way you have to edit the sentence directly, just like you would do while editing a manuscript. For some of your entries you’re going to want to delete the sentence and write it over again. That’s fine. But by making yourself delete the sentence it will feel more like editing and less like brainstorming.

Rule 3: Minor tweaks are fine. It’s not cheating to flip a few words around. That’s a huge part of the rewriting process, and one that beginnings often miss. Sometimes flipping the order of two words has a surprising impact on the meaning.

is a different sentence than

Putting Lilly first places a different spin on the sentence and it’s meaning. It looks small, but rewriting isn’t about making a few powerful changes. It’s about making hundreds of tiny changes that add up to a much better manuscript.

Rule 4:  You can add or subtract information, as long as it’s all accurate.

That’s fine because I know they are brother and sister. You’re allowed to include or remove that kind of information, but don’t change it. You can’t suddenly decide that Lilly is John’s mother. That’s not editing, that’s changing the story. It’s a valuable skill, but not the one we are practicing here. At the same time, your original sentence might be too wordy and contain unnecessary information.

John and Lilly spent their summer days up by the lake.

Rule 6: It is fine to break the sentence into multiple sentences. Don’t feel artificially constrained to stick to one sentence just because that’s where you started.

Every summer John and Lilly spent their days up by the lake. They loved to pick crab apples from the tree and skip them across the water.

Rule 7: Every sentence needs to be usable. They need to be grammatical, but also stylistically viable. They don’t have to be beautiful, but the goal here is to improve your writing, not just finish the exercise. Any sentence that is so hideous that you’d scrap it the second you put a period on the other end doesn’t count.

Up by the lake it was crab apples that John, during summer days, picked and skipped across the water, along with Lilly who did it as well.

I feel dirty. That sentence is grammatical—or close enough for prose work—but it’s so ugly that I wouldn’t use it. So it doesn’t go in the 50. Whether a sentence feels “viable” is up to you. Don’t spend more than a second on it. If it doesn’t make you say “blech” when you read it, it’s probably fine. Even if it does you might want to just move on and perhaps add a few more after 50 just to be sure you’ve done the exercise.

Rule 8: Don’t go back to check your earlier entries as you write. That’ll just kill your momentum. It’s okay if you have a few repeats. Just keep writing.

That’s it! Give it a try, and let me know what you think.

Here is a link to my first go at this exercise. Read it if you want to see an example. Prepared to be insired…and also bored to tears. It’s 50 of the same sentence! What do you want from me?